Into the Archive: Kristen Smith- Unearthed

Kristen Smith’s exhibition, “unearthed”, presents a study of crypto-zoological forms that appear as both innocuous and menacing subjects.  Consisting of five large scale sectionalized charcoal and oil stick drawings of rhizome roots drawn on Japanese kozogami paper, nine panels are attached to the wall as a grid, using t-pins in each corner of the each square. The size and complexity of Smith’s drawings allow for earthly forms to be uprooted from their original contexts of environmental interdependence, re-established as isolated entities floating somewhere between life and death.  How the viewer perceives these forms, either as impermanent or potent, threatening or beguiling, may be the result of how the mind interacts with logic, imagination and subconscious associations. 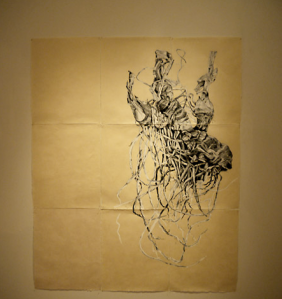 As the viewer observes these works installed in the gallery space across three of the four walls, they appear grand in scale, yet visually minimal.  The raw and delicate material and presentation is accented through subtle shadows cast from the pins that appear on the gallery walls, which reference a specimen-like treatment.  Much like an illustration taken from a science textbook, the rhizome roots are removed from landscape/context and suspended in space. The images are strikingly beautiful, but what is it about them that differ from the pragmatic intentions and safety of a science or horticultural publication?  Is it the size of the images, the material, the gallery context, or some subconscious warning that threatens the psyche’s safety?

The images sometimes appear alien.  The viewer may begin to wonder what they are, whether they “come in peace” or if there is some intended threat.  The organic lines and soft tentacles suggest an aquatic life form, deceiving visual instincts in regards to the subject matter.  The jellyfish moves in a delicate and mesmerizing rhythm, but is in fact a lethal and deadly life form.  Whether or not we immediately arrive at the realization that the images as horticultural representations or alien life forms, the drawings hold the viewer captive in visual wonder.  Popular science-fiction films such as the 1979 blockbuster “Alien” have appropriated biological visual aspects from entomology to create fictional life forms that subconsciously mingle with charged content.  This is an interesting approach in a culture so dedicated to the image. Smith’s work plays on this ability to question one’s relationship to environment, line and form.  By nature, if the rhizome root is separated into pieces, each piece may give rise to another new plant.  They are commonly referred to as “creeping root stalks”.  Somewhere between biological science, life and death, imagination and the abstract, the fragile contortions of these roots creep from the paper and float through the gallery space, hovering far from their location of birth, into a kind of science fiction, scientific romance.