← Up Next: Steve Reinke and Turner Prize*
Into the Archive: Kristen Smith- Unearthed →

Into the Archive: Quixotic

Posted: May 31, 2012 | Author: talkgallerywest | Filed under: Into the Archive, Previous Exhibitions |Leave a comment

“For the first time he could see the wondrous beauty in the shape of her face; only her eyes seemed to him singularly still and dead. Nevertheless, as he looked more keenly through the glass, it seemed to him as if moist moonbeams were rising in Olympia’s eyes. It was as if the power of seeing were being kindled for the first time; her glances flashed with constantly increasing life. As if spellbound, Nathanael reclined against the window, meditating on the charming Olympia. A humming and scraping aroused him as if from a dream. “(E.T.A. Hoffmann, Der Sandmann, 1817)

In E.T.A Hoffmann’s novella “The Sandman“ Nathanael falls in love with the life-sized robot Olympia and her perfection when looking through glasses he bought from an evil man. The photography shown at gallerywest these days fully reminds me of this favorite story. Beauty and perfection, love and romantic can be seen everywhere, but there is something odd about it.

As Nathanael finds out, that Olympia, the love of his life, is not alive herself he falls in deep depression and finally commits suicide. Is the exhibition “Quixotic” doomed to a bad end, too? 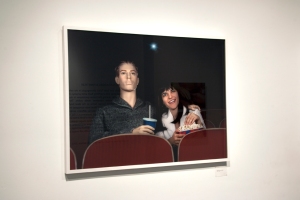 enjoying various romantic situations with her boyfriend Carl – an exact iconic description of the ideal relationship and dating practice as it is spread through television and advertisement. The artist examines collective narratives concerning happiness and lifestyle in order to create photographs drenched in perfection – concerning formal terms as well as social codes. Even though Susan Bozic scrutinizes ideals that reach far into our private, allegedly self-determined desires – a rather serious and unsettling issue – the reactions to her work are far away from any earnest frown- little wonder as Carl is no human being but an idealized copy, a mannequin. From my position behind the desk I could observe people grinning or laughing out loud, amused men commiserating poor Carl, who has to go through all this boring stuff and women smiling knowingly or wistfully at the perfect man.

But why doesn’t his girlfriend notice his artificiality, the artificiality of their perfect relationship? Why is she comfortable with her passive role as an adoring woman that is satisfied through jewelry and yachts?

Pale face, cheerless eyes, stiffness and blankness – it cannot be ignored, but she is a master in the discipline of overlooking reality. It is her facial expression, admiring, amorous, an ambiguous gaze at Carl on the tennis court, a sexy smile on the couch – the way Susan Bozic is playing her character is more than authentic and convincing.

Carl’s girlfriend and Nathanael, they both do not notice that their lover is not from flesh and blood, but we do, the parody is obvious. The artist confronts us with the hollowness of perfection, an ideal constructed through beautiful, materialistic images – she takes away the glasses television and advertising put on our faces every day. 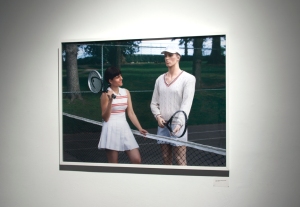 The use of mannequins is nothing new in the history of art. The Surrealists created some bizarre formations with these fake bodies and Cindy Sherman chose them for her latest shocking and horrible images. Whereas those artists present their mannequins as hurt or deformed creatures, Evan Tyler treats his girls way more friendly and caring. Entirely undamaged the mannequins can relax from their stressful lives as the ideal without losing their status. Lively hands massage their backs, which must be quite tense thanks to all the posing in the shop windows and odorant essential oils make them forget their bad conscience for giving thousands of people the feeling not to be beautiful and stylish enough just for a moment.                                                             Certainly this nice treatment is only a means to an end. It leads us to an essential awareness we might sometimes forget – the ideal is a doll, no spirit, no feelings, a cold mannequin.

When Evan Tyler took Amber and Natalia, two of “his girls”, to a spa to get them a full treatment, he and the irritated staff knew that the two ladies were out of plastic. Standing in front of the photographs that resulted from the artist’s trip into the world of beauty and recreation you have to look twice to notice their falseness – a realization that turns the perfect woman to a weird, fetishized object. Whereas Susan Bozic’s images depend on their obviousness, Evan Tylers photographs catch my eye due to their tromp l’oeil – character, which does not only refer to the mannequins themselves. The artist totally succeeds in capturing the special atmosphere of a spa through warm light and sensible close-ups. And you do not only feel as smelling the beauty products, you do smell them. With real, colorful moisturizers and crèmes Evan Tyler invites us playfully to participate in the world of the spa and triggers just as playful questions:

“What about his girlfriend, does she know about the girls, is she jealous? They are only dolls, are they?” 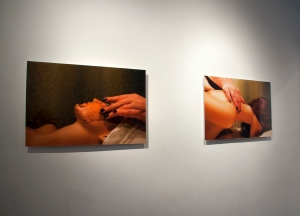 “(…) They leer at you from tall buildings and make you feel small. They make flippant comments from buses that imply you’re not sexy enough and that all the fun is happening somewhere else. They are on TV making your girlfriend feel inadequate. (…) Any advert in a public space that gives you no choice whether you see it or not is yours. It’s yours to take, re-arrange and re-use. You can do whatever you like with it. (…) They have re-arranged the world to put themselves in front of you. They never asked for your permission; don’t even start asking for theirs.” (Bansky)

Susan and Evan can’t be described as street artists in Bansky-manner, but they re-use and re-arrange something that is around in public space, something that might be seen as a symbol for unreachable ideals, for gender roles and societal conventions spread through television and advertising. Their exhibited images deal with urban rituals and socially constructed behavior we adopt to become Carls, Ambers and Natalias and demonstrate the area of conflict between privacy and self-image that emerges from this desire. As a voyeur I do not only feel accepted but wanted, even invited to this show of lifestyle.

Due to their perfection and materialism Susan Bozic’s images seem to be made for the public, even though the couple is shown in very private moments. And the spa that Evan Tyler sees as an intimate place with rituals of religious character is a symbol for luxury and status as well. Beauty and prestige as divinity, the spa or the yacht as temple, self-image as prayer – is that our urban religion?

A girl dating a mannequin and mannequins indulging themselves with a spa treatment – absurdity makes us laugh, but it also asks questions. That might be the end of “Quixotic” – certainly a happy one.

“To us – pray do not take it ill, brother she appears singularly stiff and soulless. Her shape is well proportioned – so is her face – that is true! She might pass for beautiful if her glance were not so utterly without a ray of life – without the power of vision. Her pace is strangely regular; every movement seems to depend on some wound-up clockwork. Her playing and her singing keep the same unpleasantly correct and spiritless time as a musical box, and the same may be said of her dancing. We find your Olympia quite uncanny, and prefer to have nothing to do with her.” (E.T.A. Hoffmann, Der Sandmann, 1817)