← Into the Archive: Kristen Smith- Unearthed

Into the Archive: Rowan and Sif- There is Nothing to Obscure Your View of the Sky

Posted: May 30, 2012 | Author: talkgallerywest | Filed under: Into the Archive, Previous Exhibitions |Leave a comment 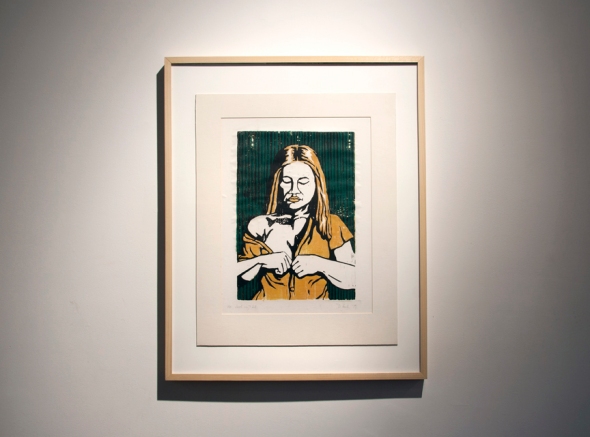 Boundlessness, infinity, unattainability– as the symbol of freedom, of the human desire to reach access to its power and magic the sky is characterized by its duality as the physical mirror of the force of nature and the place of human demand through technology as well as the spiritual realm of mythology and God, of utopia and dream.

Its face, beautiful, dangerous, puissant, can be seen from everywhere, looking out of the window of one of a big city’s high rise building or lying in the grass in the prairie – and it is never the same.

Under the heading „Rowan and Sif. There is nothing to obscure my view of the sky” the current exhibition shows three individual ways of treating their connection with nature. The imagery of the title already puts into words what is perceptible at gallerywest these days – a territory between the physical and spiritual of nature.

My experience of the exhibition – a tribute to Dough Hunter and the first time that his works are presented after he passed away in 2007 – started with getting to know Stewart Evans outside the gallery before I even saw the show. I only recognized that this modest and shy man was the artist of the work shining in the showcase when he started talking about the process of creating a light and its technical steps with the same enthusiasm in his voice which was noticeable as he had raved about the beautiful nature of Canada’s east coast a view minutes before.

Rather than serving any romantic clichés about the production of art, Stewart calls himself a “construction-maker”, distinct from “designer” or “artist”, and tells me about what he calls “the boring and annoying” part of creating a light. Even though I couldn’t follow all his technical descriptions I understood what is essential in his work: the material and how to handle it. The positive reactions of the visitors during the opening reception showed that Stewart’s nervousness before his first exhibition and the questions concerning his works was unfounded – a multiplicity pointed to one of his lights when asked for the favorite piece.

Even though his lights are characterized through their elemental and rustic look, certain fragility adheres all of them. Due to this duality Stewart’s works do not only glow for themselves but arouse a special, enchanting atmosphere in the rooms of gallerywest which could not be more suitable for receiving Dough Hunters woodprints.

During our conversation Stewart underlined the importance of establishing a connection to Dough Hunter to whom he refers with the largest piece of the exhibition – a work that lights some of the artist’s woodprints. With a “metallic border”, that adorns his light in the showroom, Stewart intended to create a link to the feathers of Dessa Harhay’s birds.

While the original and the technical meet in Stewart’s lights, it is the human and the animal, which 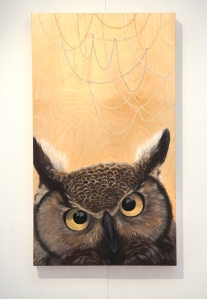 As the occupants of the sky birds, Dessa’s favored motif, seem to be very close to the freedom adored by the humans. But the detailed and delicate depicted, elegant animals – a symbol of the beauty and grandeur of nature – do not shut themselves off but appear to enter into a conversation with the human, with the viewer and let him be a part of this foreign, spiritual territory.

Due to their bizarre look and their piercing gaze the birds are surrounded by a mysterious and fantastic aura.

This unfathomable relationship with nature’s mythology as well as the original and rudimental vibrancy of Stewart’s lights both lead to Dough Hunters woodprints. Impregnated with a mixture of roughness and poetry his works exude the feeling of remoteness, originality and harmony with nature. As a viewer or even a voyeur I feel being drawn into a private world, reclusive and intriguing.

My experience with the exhibited prints of this artist is especially affected by two works.

With the first one – a work of strong color, which depicts a young woman – the artist provides insight in a highly intimate moment of physical sensuality, which seems not to be intended for the public. A friend of the family confirmed what the power of the work and the legend already indicated. The print that attracted me the whole evening of the reception opening is a portrait of the artist’s former girlfriend. One year later, in 1980, Dough Hunter generated another female portrait, which is absolutely different to the first one but not less fascinating.

It shows a beautiful woman presenting herself to the viewer with a self-confident pose and an open gaze. The similarity to Chala Hunter, Dough Hunter’s daughter and one of the exhibition’s organizers can hardly be overlooked. Little wonder as the depicted woman is her mother. That Dough Hunter is

an expert in the art of portrayal gets also proofed through the only self-portrait of the show. Whereas the artist’s features seem to be dure and strong, the background consists of the soft and natural grain of the wood, which even increases the power of the artist’s expression and his connection to nature.

But not only the energy of Dough Hunter’s woodprints filled the rooms of gallerywest – during the night of the reception opening a large amount of people came together to experience the show and exceeded all the previous numbers of visitors at gallerywest as Evan Tyler told me.

It’s the magic of art. It brings the whole family together, explained Chala Hunters boyfriend proudly.

As a coherent exhibition with all kinds of immanent references, gallerywest and the curator Colleen O’Reilly show the works of three artists, who express in very different ways but each with convincing forcefulness, their individual alliance with nature – their view of the sky.